Why I Watched The Impeachment Trial, Beginning To End (Spoiler: It wasn’t for the politics…) 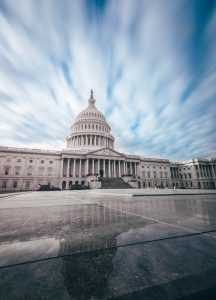 I’m more of a reader than a writer. I think of myself that way, but it’s also an assertion that’s evidence-based. In sum total, I’ve written one thriller, am writing a second in that series, one traditional mystery, and four short stories. But at two to three novels a week, for at least twenty years, I’ve read thousands and thousands of books. So there’s no contest.

And as a reader, I never, ever, want to know the ending of a story ahead of time. I’m not even tempted to flip the pages and take a peek. I mean, seriously, are you? (I do have a very talented author friend, Eileen Rendahl, who skips to the ending of books she reads ahead of time. You’d have to ask her why. I’ve blocked out whatever answer she gave, the heresy was too much for me.)

Which brings me back to the second impeachment trial of the 45th President of the United States, Mr. Donald J. Trump. Before a single argument was made on the facts, the ending was known.

Mr. Trump would be acquitted.  Because in an initial vote to determine whether the Senate had jurisdiction to try Mr. Trump, given that he is no longer president, only five Republicans joined the 50 Democrats to say the trial should occur at all.  It would require 17 Republicans to join all 50 Democrats to get to the two-thirds of the chamber (67 senators) necessary to convict. (Note: in the end, two of the Republicans who said they couldn’t, did, but even so the final vote was, predictably, not able to meet the threshold.) Still, I watched all of it. Well, almost all. I was interrupted a few times by one or another of my kids, and once by the stray cat, pictured, who for more than a year has been showing up  in my yard for socially distanced meals.

And I wondered after today’s verdict, why had I done it, why was I glued to the live feed for close to 15 hours over four days? Could that possibly have been a good use of my time? I’m going to go with yes, for three reasons.

The first is that I rode my exercise bike most of the time I watched. Over 40 miles yesterday, so there’s that. But since I could have accomplished the same mileage by finishing off Season 5 of the BBC’s Dr. Who, there had to be more. The second reason was there would undoubtedly be plot twists and small surprises of interest to someone like me, who has been in local elected office and  who writes thrillers that aren’t exactly political thrillers, but that do occur against the backdrop of California’s capital. And I didn’t want to miss any of that by being restricted to the bits people chose to tweet about or that reporters wrote about. But the last, and I think most important reason, goes well beyond the impeachment trial on its own.

Though I hadn’t thought about it exactly this way until the 15+ hours spent on impeachment were up.

In retrospect, I think something happened to me some time after I turned 40.

Since around that time (I can’t pinpoint it exactly), I’ve been possessed by the feeling that anything non-routine that I do might not come around again before I’m gone. It sounds maudlin, I know, but that’s not how I experience it.  It’s not a fear of death or a concern about my life possibly being cut short, though I am superstitious enough to knock wood as I write this. It’s more an attitude, an attentiveness, a feeling of the importance of being alive, and the notion that it is a privilege to experience whatever it is. (For those of you who practice “mindfulness” and being present, it’s not that. I’m not talking about being in the moment.  In fact, my mind more often ricochets from a connection to a memory to a future wish as part of the experience I’m having.)

It’s a sense of the value of being here that is just as important when we’re young, but probably impossible to see in the same way.

Maybe? Does that sound right?

Because while I watched and listened to the trial, arguably (hopefully) an infrequent event, yet one that will go down in history where the outcome might be determinative of more important things yet to come, I felt privileged (there’s that word again) that I could bear witness to it, as a unique event, not to be repeated. And I know now, that’s why I did it.  And perhaps more importantly, that’s why I do a lot of things. To have some small part in the wild dance that occurs daily among the near-infinite moving parts in the universe, until I can dance no more.